In 1901, an independent school for girls first opened its doors. The School founders were Jessie Moon Holton and Carolyn Hough Arms.

The high academic standards for which Holton-Arms School is known today were set during those first years at 2125 S Street, NW, Washington, D.C. Small classes were maintained to afford a maximum amount of individual attention to each student, and only the most qualified teachers were invited to join a faculty dedicated to the education of youth—“not just to the education of the mind but of the soul and spirit.” Mrs. Holton’s dream was to create an “Open Door,” where her students would be inspired to explore new ideas and develop their full potential. She also insisted that they give back to the community.

At the time of Mrs. Holton’s death in 1951, Mildred Brown became President of Holton-Arms and Sallie Lurton, Class of 1923, its Headmistress. In 1963, the School moved to the River Road campus in Bethesda, Md. The expanded facilities allowed for increased enrollment, and new courses were developed to augment a strong traditional curriculum.

In 1969, Jim Lewis became Headmaster. During his tenure, greater emphasis was placed on advanced academic courses and the improvement of the facilities. Major additions included the Alice S. Marriott Library, a photography lab, an art studio, an art gallery, an infirmary, and the Advancement Center. Once again, with new facilities came new programs: the Creative Summer day camp and LEEAP, an after-school program, offering art, music, dance, and drama classes.

Charlie Lord became Headmaster in 1987. Under his leadership, the School expanded its sense of diversity and focused on ecological concerns, ethics in the professions, and service to the community. The student activities center, housing expanded dance facilities, a double gymnasium, pool, theater, rehearsal rooms for chorus and orchestra, and several classrooms, was completed in 1989.

Diana Coulton Beebe was installed as Head of School in September of 1992. During her 15 years of leadership, Holton worked to create equity for its diverse student population; develop a strong sense of community among its constituents; support a variety of learning styles; strengthen its athletic programs; enhance the curriculum in the areas of math, science, and technology; and improve faculty salaries. The School celebrated its Centennial in 2001. The Centennial Building Project—providing students with a new science wing, expanded performing arts rehearsal and performance facilities, renovated academic spaces, and a new all-weather track and field—was completed in 2003-2004.

Susanna A. Jones became Head of School in 2007. In this role, she has spearheaded the creation of the Global Education Program and expanded and strengthened the curricular focus on science, technology, and mathematics.

Renovated in the summer of 2012, the main entrance and administrative building welcome students, faculty, alumnae, and parents to the School. Along with bright natural light and soaring ceilings, the space features thoughtful architectural details that reflect the more-than-100-year history of the School. As visitors enter, they cross over Holton’s timeless School seal and beneath the cherished motto, Inveniam viam aut faciam (or "I will find a way or make one").

Today, over 100 years since its founding, Holton-Arms appears to be quite different from the school on Hillyer Place, yet in many ways it is the same. The School continues to maintain a high academic standard. It is a place for personal involvement, a place where parents support the School by helping out in the library, on field trips, on committees of the Board, and at special functions, and a place where outstanding faculty continue to give maximum attention to individual students.

Holton's mascot is the panther.

Ever wonder, what was the mascot before the panther? View the history lesson below to find out more! 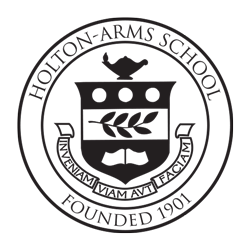 At the top of the crest, the lamp symbolizes the light cast by knowledge.

The orb signifies a guild, which from the old meaning of the word is a group that comes together for a purpose. Thus, the three orbs symbolize the three groups of students at Holton -- Upper, Middle, and Lower Schools -- who come together to learn how to learn, to develop character, and to provide service to community.

The bay tree branch symbolizes youth. The open book symbolizes the teacher’s role in imparting knowledge and the staff’s role in supporting the educational process.

The banner Inveniam viam aut faciam is the underpinning of the crest. The Latin phrase, the school’s motto, means “I will find a way or make one.”